Kindly fill this form and one of our team member will call you to book your appointment.

“The edentulous patient is an amputee, an oral invalid, to whom we should pay total respect and rehabilitation ambitions”. Per-Ingvar Brånemark

As a professor of surgery and research, P-I Brånemark is considered the father of modern dental Implantology. In the early 50’s he discovered the process of osseointegration, which later was referred to as the direct structural and functional connection between living bone and the surface of a load-bearing artificial implant.

This discovery was a result of a series of vital microscopic experiments on blood in mobile tissues, bone and bone marrow by placing titanium optic chambers in rabbit’s tibia. Later it was discovered it was extremely difficult to remove these chambers for further use after a period of healing.

Since then Brånemark and his team conducted numerous research aimed at Orthopedics, joint replacements, plastic surgery and tumor defects. In 1965 Brånemark treated the first human patient Gösta Larsson with titanium dental implants who was missing teeth as a result of jaw deformities. Larsson passed away in 2006 and used his implants for more than 40 years.

The initial reaction of skepticism and doubt was overcome in 1982 in North America at the Toronto conference on osseintegration. Here the biology, clinical research and applications of osseo integration was presented to the world and since then for 32 yeas millions of people have been able to benefit from the life changing contributions ofosseointegration.

Today the rehabilitation of patients with oral, Maxillo facial and orthopedic impairments has been accepted and adopted by the international community and through a worldwide collaboration and ongoing research and advancements we have gained enormous knowledge for treating our patients. These advancements have allowed the clinicians to apply load-bearing implants with teeth the day of the surgery and this has had a remarkable impact into the quality of the patient’s lives.

In 1989 Professor Brånemark founded the first TheBrånemark Osseointegration Center (BOC) in Gothenburg, Sweden (www.branemark.com). BOC’s principal task was to offer management for patients with severe oral, maxillo-facial and orthopedic disablements. There are only 10 such clinics in the world and in the June of 2013 due to its excellence in dental implant treatment the Dubai BOC, was founded by Dr Cotsas and Dr. Petros. This demonstrates a milestone of progress for the health system in Dubai being able to host a BOC in the Middle East.

“With dental implants & new teeth all in one day my life changed thanks to SAME DAY DENTAL IMPLANTS. I can now bite into my food without pain & with confidence”. Said P.V Shah an elderly man who received his oral rehabilitation in Dubai by Oral Maxillofacial Surgeon Dr. Costas at SameDay Dental implants. Since 1991 Doctor Costas has been practicing as a full time Maxillofacial & Oral Surgery specialist concentrating on immediate loading of dental implants. 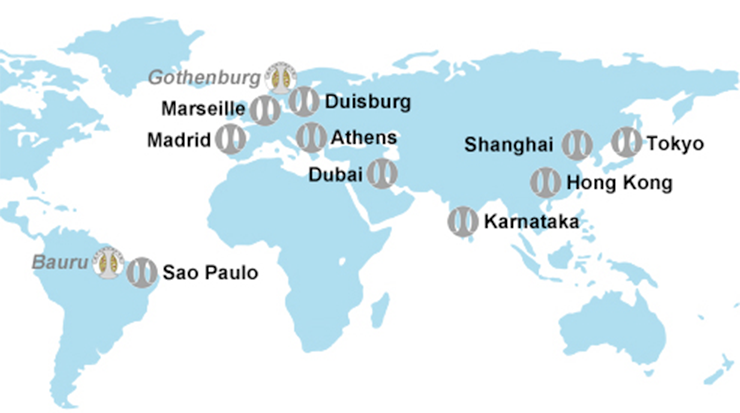 “Less is more, that is our ambition when it comes to dimensions and numbers of anchoring elements” says Per-Ingvar Brånemark. In ordinance with the founding father of modern implants we can now install a full set of teeth on only four implants thanks to the new advancements in implantology. This total rehabilitation technique for the edentulous patient known as the All-on-4® treatment concept, is a well documented surgical and prosthetic medical procedure.

Clinic like The SameDay Dental Implants Clinic utilize this treatment protocol allowing patients to have their implants and teeth placed all in the same day as opposed to the conventional technique where dental implants are loaded with teeth usually two or three months later.

Every year all the BOC clinics from around the globe are invited to the Annual Brånemark Osseointegration Center meeting in Gothenburg Sweden to pay respects and tribute to the man who started it all.

“ It is the works of Professor Brånemark sixty years ago that allows us to change our patient’s lives on a daily basis”, said Dr. Costas at the ABOC annual meeting 2014 in February. Here SameDay Dental Implants Clinic was given the Leading Dentists of the World award as a special member at the ABOC meeting 2014.

While new advancements in the medical and dental world impact our patient’s lives, one must not forget that the basis of this invention lies within a man who saw a future while living in the past

I had severe pain and went to them for removing my wisdom tooth. The Doctor Costa was chatting with me and then he told me that tooth has been removed. I have shared this experience with everyone I met as I did not feel or know of its removal. And to top it all no after pain or anything joined work next day without any swelling. Thanks to Sameday dental implants are the most professional dentists I have come across in Dubai.

At the SameDay Dental Implants Clinic three of my teeths were extracted and I received one implant with the crown - all done by Dr.Costa. The service that I received was amazing - the knowledge, professionalism and the level of experience was at the highest level possible. I can say with ease that they will be my choice for any potential dental issues. Overall, from the beginning until the end I was actually enjoying being at the dental clinic - thank you very much.

My wife and I have had excellent experiences with SameDay Dental Clinic. Treatment is clearly explained before being undertaken, the facilities are extremely well presented and after care support outstanding. Thank you to Dr. Costa and his team of professional dentists and nurses. Also thanks to Ms. Myra and her colleagues for their careful follow up on appointments and warm welcome upon arrival..

Have a Question? Call us Now

Need Help? Drop us an Email

Have a Question? Call us Now

Need Help? Drop us an Email